The History of RAPTOR Inc.

In the early 1970s, Scott Adamson and Jim Williams started a raptor rehabilitation group named “The Southwest Ohio Raptor Rehabilitation Clinic” or “SWORC”. The Hamilton County Park District allowed them to operate out of a garage located behind the house at Farbach-Werner Nature Preserve. Scott and Jim financed the entire operation out of their own pockets and with whatever donations they could obtain. Two veterinarians donated their time and facilities at little or no cost. Several cages were obtained from local research centers and others were built. Many birds were treated and released during this period. Several non-releasable birds became educational ambassadors, including the famed Barred Owl “Henry” and the infamous Great Horned Owl “Lazarus”.

Scott was hired as the Director of the Lake Erie Nature and Science Center near Cleveland, OH and relocated his family. The cost of operating “SWORC” became too much for Jim to handle on his own and the decision was made to form a non-profit organization to carry on the work.

The new organization was incorporated in 1978 as RAPTOR Inc. RAPTOR is an acronym for the Regional Association for the Protection and Treatment Of Raptors. With the birth of RAPTOR Inc., a new board was created with Bill Moring serving as the first president. The operation was moved to Bill Moring’s residence in College Hill. The late Charley Harper, local wildlife artist extraordinaire, designed and donated the distinctive RAPTOR Inc. logo that is still used today. RAPTOR Inc. grew to several hundred members and became a respected rehabilitation and conservation organization in the Greater Cincinnati area. Outgrowing Bill and Ann’s house, RAPTOR Inc. entered into an agreement with the Hamilton County Park District to use the house and barn on Covered Bridge Rd. near Winton Woods.

Sadly, Bill Moring passed away right before the move to “Covered Bridge”  in 1990. Volunteers carried on the vision. Enclosures were built and the house was rented to a caretaker who was responsible for feeding the birds during the week. For the first time there were large flight enclosures and plenty of room for freezers of food. Bird care was managed from a central location and there was housing for the resident birds used for educational programs. While RAPTOR Inc. became a more mature organization, thousands of injured raptors were admitted and treated. Also, hundreds of educational programs were provided to the community.

In 1991, RAPTOR took part in the Peregrine Project, working with the Ohio Department of Natural Resources (ODNR) to re-establish the Peregrine falcon in the greater Cincinnati area. Peregrine falcon fledglings were hatched in captivity in Minnesota and then relocated to a “hack box” atop the Cincinnati Commerce Building downtown. RAPTOR Inc. volunteers monitored the young birds as they eventually struck out on their own. Peregrines continue to nest and feed their young from this nest box downtown. Thanks to this early conservation work the peregrine falcon population recovered, and they have been removed from Ohio’s threatened and endangered species lists.

In 2002 there was a sudden outbreak of West Nile Virus, a disease spread by mosquitoes. The infection had a significant impact on local bird of prey populations, especially red-tailed hawks and great horned owls, with 117 birds admitted between July and September of that year.

In 2005, RAPTOR purchased property adjacent to the Cincinnati Nature Center in Milford, Ohio to serve as the future site for a new raptor center. This was a considerable leap for the all-volunteer organization. The new property consisted of a large red barn located on 8 acres of land. 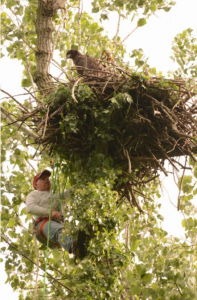 In 2010, thanks in part to a large private donation, RAPTOR Inc. was able to begin conversion of the red barn into a new headquarters for the organization and center for rehabilitation activities. New enclosures were constructed, including multiple flight enclosures, the largest being 16 x 16 x 140 feet – suitable for eagles. RAPTOR Inc. moved into the new facility in March, 2012. RAPTOR Inc. continues to serve the greater Cincinnati area, rehabilitating injured birds of prey and providing educational programs to the public about raptors and their contribution to the ecosystem. With room to expand on the current property, RAPTOR Inc. plans to construct an educational facility that will be open to the public where people can visit to see and learn about raptors.

RAPTOR Inc. is still primarily a volunteer organization. Specially trained volunteers perform duties including: coordination and pickup of injured raptors, rehabilitation and release of injured raptors, care and feeding of educational ambassadors, delivering educational programs, and maintenance and enhancement of RAPTOR Inc.’s facilities. RAPTOR Inc. continues to be governed by a 9-member Board of Trustees, with day to day operations managed by RAPTOR Inc.’s Executive Director, Cindy Alverson, and Associate Director, Jackie Bray. RAPTOR Inc. is a 501 (c) 3 tax-exempt non-profit organization funded through educational programs, memberships, grants, and donations. Careful resource management ensures that RAPTOR Inc. will continue to serve our community far into the future.